Jakob Lohmann is an artist from Germany, born in 1995. He discovered circus during his high school time where he joined the local youth circus. Finishing high school he continued to pursue his circus activities professionally at Codarts Circus Arts in Rotterdam, the Netherlands. During the 4 year degree he created various performances and started to find and develop his own artistic vision and style as performer.

Using floor acrobatics and balances as his main tools, his work thematises the actor/spectator relationship within the performative space.

In 2019 he joined the Anfibia Project, an interdisciplinary performers training project in Bologna, Italy which finished in October 2020.

„How can we challenge the established expectations and performance formats within art to create work that goes beyond consumption and forces the spectator to take action as part of the development of the performance?“

You enter the theatre, assuming your role as the audience. Is that a concious role? Are you performing your role?
Being Audience|Being Performer questions the roles we assume both inside and outside of the theatre.

Being Audience|Being Performer is dealing with the roles we assume both consciously and unconsciously. In the context of theatre that is the role of the audience for the spectator and the role of the performer for the actor. Here the spectator is usually in a passive position, functioning as an observer and as a judge over the performer. We observe the same kind of relationship in the political landscape and the daily issues our society is dealing with both on a national and international/global level.

Being Audience|Being Performer is trying to challenge this traditional relationship by inviting the audience to become performers and actors themselves. This counts for inside, as well as outside of the theatre.

„This piece is only a rehearsal“

The real performance is happening outside of the theatre. People need to take responsibility for the issues we face as a society and become actors themselves to create a better alternative, instead of spectating and judging the political performers on stage. In the theatre, when the actions are happening inside the auditorium, that becomes the stage. Outside the theatre the stage moves from the parliaments into the streets. 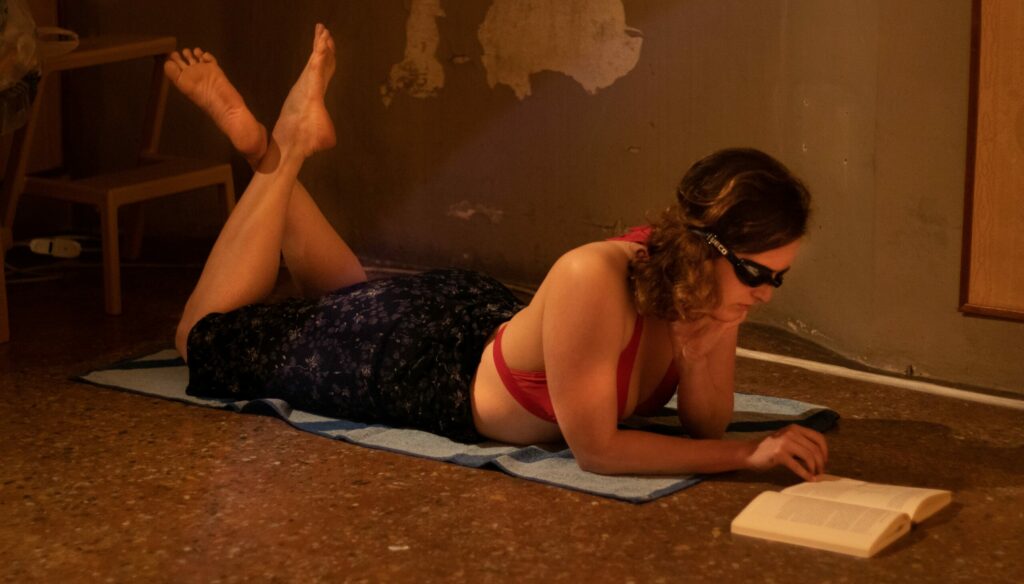 Inside the space of the exhibition, besides the space of the installation, an additional research and explorative relationship space will be explored. A moving space of actions. The body-engine, the mind-engine tend subtle and fragile threads which become light, web, connection, entanglement. Everyone’s bodies, everyone’s minds.

In correlation to the exhibition under the same name of the artists Stefano Arienti, Pierpaolo Campanini and Maurizio Mercuri, curated by Fulvio Chimento, this installative pop up performance aimed to create another layer to the exposition. Going beyond static aesthetics to explore a space in flux.

This performance was created for the Open Day of Codarts Circus Arts in 2017. This piece focusses on the theme of cause and effect, as well as breaking and playing with the boundaries of the conventional Stage.

The performer as the person on stage controlling the actions. By starting the chain reaction “the performer” is handing over the control to “the audience”. The space gets separated into UP and DOWN. He is no longer able to influence what is happening on stage. The actions necessary to be taken for either the success or the failure of the machine are up to “the audience”. Having this responsibility as well as them being observed from the audience UP makes their actions important and relevant for the piece. By entering the room, they unwillingly became performers.

The space being separated into UP and DOWN while DOWN the action happens and UP observes. Being UPSIDE-DOWN inverts the space and DOWN becomes UP as UP turns into DOWN.

“A good act has a clear beginning and end.” ​

Nobody enters a theatre neutral. To visit a theatre means having certain expectations and means to follow a set of socially established rules. We go to the theatre to consume. The chairs you are sitting in are designed to keep you still and silent for the duration of the show. They don’t want you to intervene in the performance. There is a clear beginning and end, so you know when to pay attention and when to applaud. ​

“The act has already begun?” ​

By blurring the outlines of the act, the set of rules gets blurred as well. In this area of uncertainty, a new relation between performer and spectator can get established. In Swallowing Tongues, the spectator is forced to take action, becoming a spect-actor. He becomes intrinsic for the success of the performance, taking responsibility for someone else as well as for his own actions.

The performance starts unexpected and slowly transforms the space. Integrating the audience into the Installation. The stage gets expanded into and behind the auditorium. When the start of the performance gets blurred between ‘what is already act’ and ‘what is just the setup’, it leaves the defined role of being audience open just long enough to establish a human to human relation rather than a relation of performer to audience.
During the piece the audience becomes essential for the success of the performance. Performer and audience stand in a tight relation of dependency with each other. The audience is being elevated to the state of the performer, closing the gap that usually separates the two.
After the construction is finished, the audience is left with the image of the counterbalance and together, performer and audience, are facing the problem of how to get down again. A question of trust, risk, and working together.

The piece has been worked into a half hour street show which was shown during multiple Festivals. (Edinburgh Fringe, Circusbende NDSM Amsterdam, Bajesdorp Festival,…)

This piece was created in the context of the show “My Name is Wollek” under the direction of Roberto Magro. „Into The Woods“ is part of a bigger research of working with wooden planks as tools. The piece was performed at the Brocante Festival in Italy in 2018, as well as during the Werelds Delfshaven Festival in Rotterdam in 2019 with different casts.

There are plans to turn this piece into a longer show. Rather than working with a fixed cast the goal is to work with local people that don’t have a circus, nor necessarily a performance background.

„For me it is about giving trust to strangers and being in need of one another to create an intense and real relationship on stage.“

This text is the first part to a performance playing with the physical presence of creators of art and how it changes our awareness towards the artworks, questioning ownership when multiple artworks come together to form a new piece.

In room1 the audience could see a floor acrobatics improvisation to music coming through the speakers. The rather normal setup for a contemporary circus performance. The Artist using music to underline his movements and to play with the rhythms etc.​

In room2 the music for room1 is being created live. A band is performing their song creation which gets transmitted to the first room. Here the musicians are physically present while the floor acrobatics are only visible through a livestream which is projected onto the wall behind the band.

The different setup changes the perspective and brings awareness towards the physical presence of the creator of an artwork.